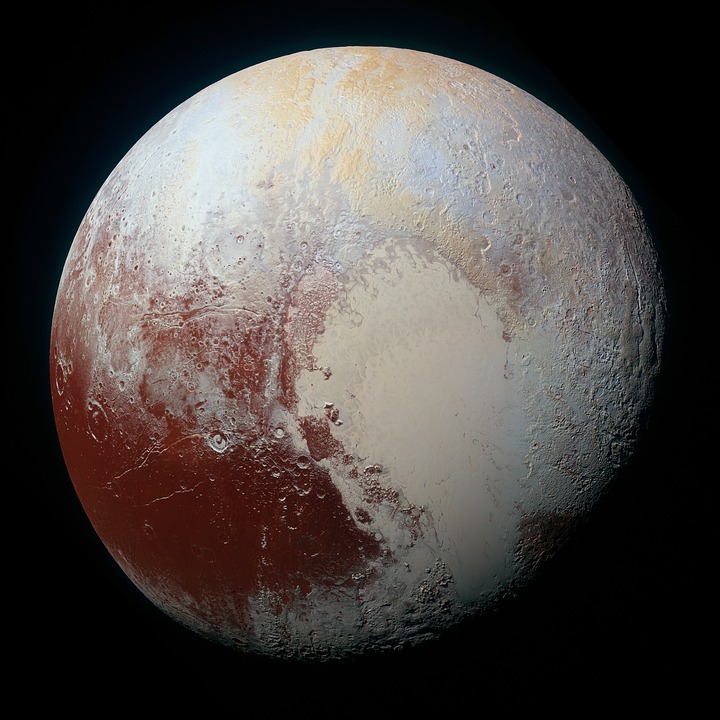 At first, NASA decided that Pluto was no longer a planet because it was too small. Then, the public outcry led them to bring Pluto back as a planet, but they gave it the term “dwarf planet.” Whatever the case, Pluto in astrology still holds a deeper meaning. By carefully analyzing this planet, we can figure out how it affects our astrological charts. Pluto is typically associated with colors like metallic black and dark red. It is also associated with concepts like terrorism, destruction, danger, rivers, death, sex, regeneration, tunnels, wealth and occultism.

Pluto hasn’t been recognized as a planet by mankind for very long. It was only discovered a few years before the formation of the Third Reich. This planets connects to Scorpio and is the ruler of the destructive choices we make in the world. It often speaks to the human desire for sexual repression, frustration and social taboos. This planet rules the sign of Scorpio, which is the sign of war and sex. As such, Pluto is the planet that represents when destruction, repression and nuclear energy can no longer be contained. When Pluto cannot contain any more repression, it spins out of control and leads to destruction and destructive choices.

Pluto is the ruler of Scorpio along with Scorpio’s traditional ruler, Mars. Mars represents things associated with Aries like masculine energy, clarity and initiative. Meanwhile, Pluto is often considered its feminine counterpart. Pluto shows Mars’ ability to accept the feminine side of things. If misconceptions and incorrect convictions weren’t an issue, this duality of male and female would not be a problem.

Scorpio exalts Uranus, which means that individuality and asexual impulses can overcome a part of our physical being. As our soul traverses from one life to the next, how is it possible that remain stuck to superficial ideas like race, gender and race? Traditional astrology may not consider Pluto as important, but it can certainly darken people when it is positioned close to the ascendant. Its effects can be felt in every day life. Pluto represents our ability to overcome even death as we subvert time and space.

Pluto as a Planet

Because of its size, Pluto has been downgraded to being just a dwarf planet. Pluto in astrology was not discovered until the 20th century. It is invisible to the naked eye, so ancient man never knew that Pluto existed. Once it was discovered, it was named after the Greek god of the underworld. Today, Pluto is actually smaller than some of the moons in our solar system, but it orbits around the Sun like other planets in the universe. Known as the ninth planet, it was actually predicted to exist before it was found since its existence modified the orbits of Neptune and Uranus. The discrepancies in Uranus and Neptune’s orbits led astronomers to hypothesize that another, unseen planet was there that changed their orbits.

Pluto has an inclined, eccentric orbit. At times, it is closer to the Sun than it is to Neptune. Since its downgrade, Pluto has basically been set on the same level as dwarf planets like Makemake, Ceres and Eris.

The Manifestations of Pluto

Pluto in astrology is not always a good thing. While it is not exactly evil, it can certainly bring negative things into the existence. Pluto will generally not manifest in a positive way. If you are looking for evil or destruction in your astrological chart, look for the house that Pluto resides in. Pluto often manifests as possessive behaviors. It can bring destruction, dark emotions and jealousy. This planet can bring along judgment, dismissal and a deep repression of our instinctive impulses.

When Pluto manifests, it can bring along natural disasters and wars. Often, it affects areas where people are troubled by rivers of ancestors. They may be unable to break free from the ancestors and accept the destruction or death that occurred in their last incarnation. If Pluto has a strong setting and good aspects, then it can bring regeneration. It can show us a way to make a deep change that we previously feared as we seek healing and freedom. If we can connect deeply with Pluto in astrology, we can discover that nothing is impossible. Death is only a concept, and our lives are our personal responsibility.