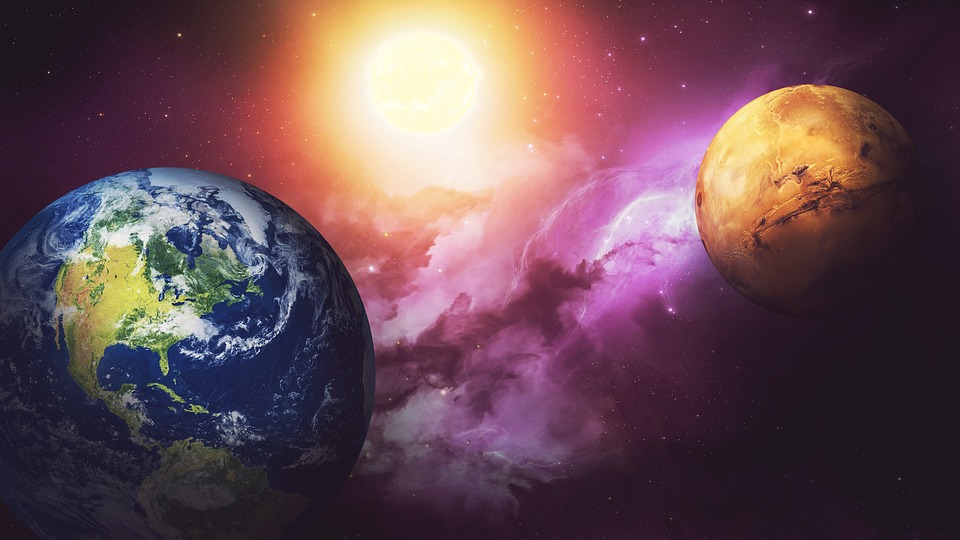 Mars is typically associated with the color red. As the ruler of Aries and Scorpio, Mars is associated with war, sex, passion,anger and aggression. It is also connected to things like soldiers, hate, meat, guns, warriors and iron. This planet is also connected to the day Tuesday. Mars ultimately a paradox as the planet that starts and ends our life. It is the start of the zodiacal cycle with Aries and the end of the cycle with Scorpio.

While Mars may frequently be connected to war and destruction, this is all because of its animalistic nature. If we do not give this animalistic nature free reign, When we restrict our sexual expression or the expression of energy, then it ends up causing unusual frustrations and inhibitions. Mars is our first chakra, so it is our most basic energy. Often, it represents `the fears that seem to control our lives. If we can be courageous and live to our fullest potential, then Mars will help to ground us, give us the energy we need and help us resolve any existential issues.

Mars in astrology is known for being the beginning of beginnings. As the ruler of Aries, Mars is the first breath we take in life. It is a symbol of karma and our fate. It is our innate instinct that helps to guide our life. While we cannot let this instinct become too strong, a healthy sexual instinct and gut drive helps to guide us and push us beyond our limits.

Mars in astrology is often considered instinctive, angry, aggressive and fast. At the same time, it provides us with a pool of dignity. Depending on the dignity, aspects and sign, Mars can give us the energy we need to achieve our goals. When Mars is weak, it can cause our energy to become bent and lead us to carry out self-destructive behavior. Mars is the master of all cries of passion and the instinctive.

Mars as a Planet

The planet Mars is named after the Roman god of wars. It is known as the red planet because Mars appears red to the naked eye on Earth. This red coloring comes from rust that glows a reddish color on the planet’s surface. While Mars may be our goal planet for colonized space, it is not a particularly friendly planet for humans. Compared to earth, it has a thin atmosphere, cold surface and strong dust storms. It also has two moons known as Deimos (the name means panic) and Phobos (the name means fear).

Mars in astrology is all about energy, vibrancy, fire and spice. It has the ability to inflict pain and be the double-edged weapon that bears down on us. Mars in astrology is all about our desire to join in the battle and fight for what we want. Without the help of the Moon and Venus, we cannot understand emotion. Without the help of Mercury and the Sun, we cannot understand common sense or self-awareness.

Mars is all about energy, ambition and aggression. It is the energy that drives us forward and onward. In retrograde movements, it is one of the most difficult backward movements of the zodiacal circle. It represents all of the acute physical, mental and emotional states. Its rule and fall are found in the Water element, which means emotion is both the greatest challenge and reward. A healthy Mars involves the Moon on our chart and a watery nature.