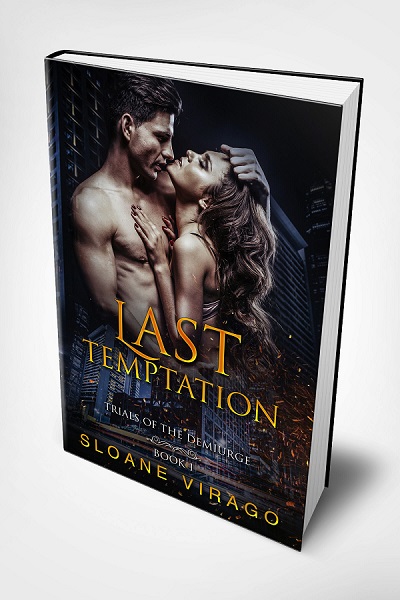 Today, I got to sit down virtually with Sloane Virago to discuss the release of her debut novel, Last Temptation. Sloane Virago has written more than 20 romance novels in the past as a ghostwriter and collaborator, but this will be the first novel she releases on her own. Last Temptation will be released on February 1, 2021, so keep your eyes open for it!

1. I really enjoyed reading this book—I really didn’t expect the ending. How long did it take you to make this book?

Originally, I had the idea for this book when I was 14 years old in high school. I wrote the ending back then. Later on, I returned to the book concept when I was living abroad in Taiwan. I ended up writing the entire book in just a couple of months, but I ended up setting it aside when I came home. Almost a decade later, I picked up Last Temptation again to make changes and updates to it.

2. When did you initially discover that you wanted to become a writer?

I was actually in elementary school when I first thought about becoming a writer. Back then, I had this dream of becoming a poet and even earned money for a poem that was published in an anthology. I didn’t get my next paid writing gig until I was 21 though. When I first paid an entire student loan payment with writing, I knew that this was a possible future.

3. I know this is your first book under your own name, but you’ve also written books before. How long does it normally take you to write a book?

It depends entirely on the book and the situation I’m in. For example, I’ve been a ghostwriter for people who handed me the outline of the book and told me not to do any editing. In those cases, I can write a novel within a month or so. Last Temptation took me a decade from start to finish, but I started and stopped it multiple times—and I was in charge of all of the outline and related work. If the only thing I’m working on is a novel, it only takes a few months for me to write it.

4. Some parts of this romance novel were just incredibly interesting to read. Where do you get all of your ideas from?

A lot of my ideas just come to me. Whenever I’m stuck, I just return to the characters. I create entire backstories and personal histories for each character, so it really feels like I know them before I even begin writing. If I’m ever stuck about what each person would do in each situation, I can just put myself in their shoes because they’re like real people to me.

5. When you are writing, what is your work schedule like?

I generally start working around 10 in the morning, and I’ll keep working until lunch. After lunch, I’ll work until 5 or 6 before stopping for a walk. If it is a really nice day out, I might take a walk after lunch as well.

6. Some of these scenes were incredibly steamy! What does your family think about your writing?

(Laughs) That’s a good question! Honestly, I haven’t told them that I write romance novels. I don’t think I could do what I do if I had to worry about my grandmother or grandfather reading it later. My family knows about my other writing projects, so I just leave it at that.

7. What is the first book that ever made you cry?

I started reading when I was really little, so I can’t remember that far back. Off the top of my head, I can remember crying horribly when I was 8 and finished Where the Red Fern Grows.

8. What do you do when you aren’t writing?

I love hiking and going on long walks with my dog. I’m married and have a toddler, so we often go to the beach or on hiking trips as a family. More recently, I’ve started getting into Warhammer because of my husband, which is a hobby entirely different from my other passions.

9. Do you think having a big ego helps or hurts writers?

I think ego hurts writers a lot. No one is ever perfect, so there is always something new to learn. If you have a good editor, he or she will kindly help you become a better writer. Sometimes, the hardest thing is hearing that a story you love isn’t good, but you have to hear these critiques if you want to get better.

10. What other writers are you friends with? Have they helped you become a better writer?

My closest writing friend is my husband. His writing style is so different than my own, so it makes it hard to learn from each other sometimes. He has a very straightforward way of writing stories, but I like to include more feeling. When it comes to ideas, it is so useful to have him around to help me think about new characters or plot developments.

11. What did you do with your first paycheck from writing?

Unfortunately, I am almost 100 percent certain that I spent it on student loans. I wish I had something more exciting to tell you.

12. What is your favorite part about writing?

I absolutely love the feeling of getting lost in an entirely different universe. When you write a story long enough, the characters come alive. You dream about them, and you think about how they would respond to different things you see each day. Sometimes, you get so wrapped up that it feels like your story is more real than your real life.

Of course, that feeling goes away as soon as I start editing. Editing feels like pouring out a bucket of nuts and bolts that I have to slowly sort through and reorganize. It is absolutely necessary for the book, but it is less immersive than the experience of actually writing a novel.

13. Is Sloane Virago your real name or a pen name?

Sloane Virago is a pen name that I chose. In addition to writing, I am also a part-time academic. Between that and not wanting my grandparents to read my steamier scenes, I feel like writing under the name of Sloane Virago is the best choice. Hopefully, I’ll be able to retain some of my anonymity for as long as possible, but I know that that might not be possible.

Last Temptation is my first debut novel, but I plan on publishing more books after that. Temptation’s End will be the second book in the series. For me, just getting to publish books as a non-ghostwriter is a huge accomplishment. If I can stop doing my other writing work and only write novels, I would be happy.

15. Sloane, now that you have finished Last Temptation, when do you think you’ll release the next book in the Trials of the Demiurge series?

That’s an excellent question. I’ve committed to finishing it by February of 2021, but I am hoping that it will be done sooner than that. It all depends on what my writing schedule looks like for my other projects as well as how the pandemic plays out—at the moment, a lack of preschool options makes writing harder than it ought to be sometimes.

16. If you didn’t work as a writer, what would you do for your career?

I would probably be a full-time professor or teacher. After teaching in Taiwan, I developed a passion for teaching, which is why I ended up going back to school for my master’s degree. Writing is my first passion though, so I plan on doing that for as long as possible.

Sloane Virago’s latest work, Last Temptation, is now available for sale through Amazon Kindle. You can also follow her on Facebook or Instagram to get more updates or to ask questions. Later this month, we will also be publishing a review of her novel, so stay tuned.